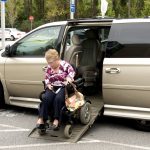 It was happening even before the pandemic struck. I couldn’t reliably get a wheelchair cab. It was hard to find an accessible restroom (one that fits my wheelchair and the door will still close). Public transit wasn’t up to snuff. My wheelchair was broken during airplane travel. Accessibility—full and real accessibility—for people with disabilities was either declining or not improving as promised.

Indeed, accessibility seems to have worsened in many real ways: with inaccessible sidewalks, pool lifts missing batteries, broken elevators on public transit. Plus, all the problems that previously existed. I keep being told to be patient, to be understanding—that everyone is having a tough time. It is true that we are all experiencing challenges, but people with disabilities have to live with more restrictions and exclusions than others. Then we’re often told we have to continue to wait for the accessibility and inclusion promised by law (and also by just good common sense and ethics).

Kelly Mack is a communications professional, specializing in health issues. In her spare time, she writes articles about living with rheumatoid arthritis (RA) and moderates for RheumatoidArthritis.net. She has lived with RA since age two, resulting in significant physical disabilities and use of a motorized wheelchair. Kelly earned a MA in Communications from Johns Hopkins University and a BA in Psychology from Bryn Mawr College. You can find Kelly on Twitter @MsKellyM.

If cabs stopped picking up nondisabled people. If there were no more sidewalks. If air travel regularly resulted in broken legs for passengers (the equivalent of broken wheelchairs). There would not be a call for patience. There would be an uproar around the world about fixing these outrageous failures. Yet these are situations people with disabilities encounter on a regular basis and are instead told to wait patiently for actual accessibility to catch up with decades old promises.

The things that I pay for (or want to pay for) result in no or poor service for the sole reason that I use a wheelchair. The basic minimums that nondisabled people expect are delightful surprises for me when they actually happen.

The accessibility backslide must stop. The thinking must be turned upside down: if everything is accessible, then it works for everyone. Accessible cabs can pick up all people. Accessible airplanes will ensure the safety of all passengers and their vital property. Community spaces and services like sidewalks and public transit that are accessible work for everyone.

Accessibility is not a lofty goal to aspire to. It is not the thing to work on when everything else is done. It is not the cherry on top. It is not the last thing we should get to when building or maintaining our society.

Why is it that, 32 years after the Americans with Disabilities Act (ADA), people with disabilities have to sue their communities for accessible sidewalks and public transit? (Many more examples can be easily found in an online news search.) We have known all these years that it is not only illegal to maintain and build an inaccessible society, but it is also unjust, wrong, and frankly unproductive for society. But it still keeps happening.

All around me I see accessibility in name only. I see sidewalks that work except for missing ramps or areas impassable due to restaurants expanding into public spaces. I see pool lifts, but depleted (or just plain missing) batteries. I see public transit, but broken elevators. The accessibility is supposed to be there, but it is broken by a missing link, a forgotten detail, or just plain negligence.

People with disabilities have been told: just ask for the improvements. Be patient. Don’t get angry. But years of asking nicely have only resulted in earlier accessibility gains being lost, being put by the wayside, being underfunded and de-prioritized. In many real tangible ways, the promise of the ADA now feels like a broken promise.

I’m tired of asking the same hotel I have visited for 10 years to make their pool lift actually work. Sometimes it does, mostly it doesn’t. I ask in advance, when I arrive, during my stay, and after for the same thing over and over again. I’m tired of asking for the things that I need, that are supported by decades of law and litigation—as if they are doing me a favor when it is just the right and legal thing to do. I’m tired of pleading for my rights and humanity to be recognized.

I’ve seen it all around me where I live. Venues that have forgotten about accessible seating (or plain old safety). Construction and restaurants that have forgotten about accessible sidewalks. Having to use my wheelchair to travel from the third train stop from my location because the closest two had broken elevators and it was my only way of reliably getting home since I can’t trust an accessible cab will show up. (And who knows how long I would have to wait for one.)

I’ve reached out to local government only to receive a delayed and lackluster response. It isn’t enough. Leaving behind people with disabilities due to forgetfulness is not OK. Every community is responsible. We are all responsible together for ensuring, maintaining, and building accessibility. It must be done and there must be no further delay because every postponement just means more work and additional expense down the road. (For an egregious example, check out the recent news that New York City reached an agreement to make 95%—not the entire system!—of the subway accessible in 33 years or 65 years after the ADA. Can it be called progress if it takes a lifetime?)

The anger is coming. The people who continue to be left behind and pushed down, excluded from their community with inaccessibility and cavalier disregard, will eventually hit their limit of patient tolerance. Plus, just look at the population growth: there are more people with disabilities entering our ranks.

All communities need to take an honest look at themselves for accessibility. Instead of reacting (or failing to react) to complaints, they need to take a proactive approach to assess accessibility barriers and create plans to remove them. It’s time to actually build the society we want and expect for everyone. It’s time to finally become accessible.