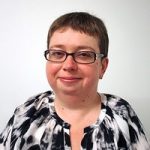 As a wheelchair user living in Washington, DC, I have found accessible taxi service highly unreliable for decades. I have filed too many complaints to count. I participated in mediation after charging a taxi company with discrimination, resulting only in empty promises for improving service with no actual actions to do so. I joined the DC Department for Hired Vehicles (DFHV) accessibility advisory committee, only to find no actual actions taking place as a result of the meetings. The refrain is simply repeated over and over: cab companies are not employing enough wheelchair accessible vehicles (WAVs).

Kelly Mack is a communications professional, specializing in health issues. In her spare time, she writes articles about living with rheumatoid arthritis (RA) and moderates for RheumatoidArthritis.net. She has lived with RA since age two, resulting in significant physical disabilities and use of a motorized wheelchair. Kelly earned a MA in Communications from Johns Hopkins University and a BA in Psychology from Bryn Mawr College. You can find Kelly on Twitter @MsKellyM.

It’s long past time that DC fulfill its promise made in 2010 by then Council Member (now Mayor) Bowser and make cabs in DC fully accessible. Ignoring the civil rights of people with disabilities and denying access to services offered to the rest of the paying public should no longer be tolerated as we approach the 32nd anniversary of the Americans with Disabilities Act.

While DFHV claims the pandemic continues to harm the cab industry, their own data demonstrates cab numbers for non-WAVs have recovered and in fact increased compared to 2019. However, WAVs taking trips have declined by more than 50% and continue to decrease.

According to DC law, at least 20% of each taxi fleet should have been made accessible by the end of 2018. See citation:

However, DFHV reported in February 2022 they are only requiring 12% of taxi fleets be accessible. While DFHV claims cabs are meeting their regulation requirement of 12% WAVs in the fleets, they are counting cabs that are not taking trips, but instead sitting in parking lots. WAVs actually taking trips (providing service) amount to 1.5% of the fleet or merely 73 out of 4,770 cabs (as of March data).

Additionally, basic math reveals that cab fleets are not even meeting that illegal 12% minimum. A generous calculation using the total number of WAVs in March 2022 (including those not taking trips and just sitting in parking lots) is 232 and the total cab fleet is 4,770 cabs, meaning 4.9% of the total fleet is accessible. This doesn’t meet the old rule of 12% nor the current one requiring 20% of fleets be accessible by the end of 2018.

A 2017 WAMU news piece reveals that the issue of WAVs sitting in cab company parking lots without drivers is a longstanding one (and not created by the pandemic as DFHV has indicated): Wheelchair Accessible Taxis in D.C. Go Unused, Setting Back Efforts To Improve Transportation Equity.

This is unacceptable and results in poor or denial of service for people with disabilities across the city. In my case alone, a cab company admitted they had fulfilled less than 50% of my bookings. And bookings are bound to be suppressed because people with disabilities will call a cab only as the last resort because they are so unreliable. No shows mean missed appointments, missed flights, missed visits with loved ones, and more costs in time and anxiety that are never repaid.

In short, DFHV is failing to regulate and the cab companies are failing to follow DC law.

Several actions need to be taken immediately to rectify this significant equity and discrimination issue:

People with disabilities deserve swift action to make cab access equitable. Waiting 32 years is already much too long to rectify this discrimination.