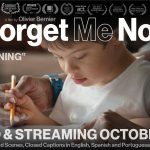 Cinema Libre Studio is thrilled to announce the home entertainment release of the Slamdance Grand Jury Prize-winning documentary, FORGET ME NOT. The film begins in the delivery room as father and filmmaker Olivier Bernie turns the camera on he and his wife as they learn that their son, Emilio, was born with Down syndrome.  The film follows their journey as Emilio prepares to start school and his parents find themselves embroiled in a challenge all too common for families with children with disabilities – to secure the right to an inclusive education.

“Bernier’s direction is startlingly intimate and thoughtful, navigating the waters of neo-autobiography with incredible texture and nuance. It’s a film where the form is less the point than it is a vessel for best communicating a film with profound humanity.” – Joshua Brunsting (CriterionCast)

Bernier was awarded a grant to produce the film from the Brazilian non-profit Videocamp, in association with Alana Institute, as part of its core mission: inclusion is a fundamental right. Inclusion in society is guaranteed by the Americans with Disabilities Act (ADA), passed in 1990, and in education through the Individuals with Disabilities Education Act (IDEA), which ensures American students with a disability are guaranteed the right to be educated in the least restrictive environment, also known as general education.

According to the National Down Syndrome Society, “Inclusion is an educational process by which all students, including those with disabilities, are educated together for all, or at least most, of the school day.” However, the reality for families is that inclusion is far from real, and in New York City, where the Bernier’s live, its public schools are the most segregated in the nation.

Bernier’s film, his documentary feature debut, was selected as the Opening Night Film for the Human Rights Watch Film Festival. The film reflects on the historic treatment of people with disabilities. It was an investigative report by Geraldo Rivera in 1972 that led to the eventual closure of most of America’s institutions for people with disabilities.  With FORGET ME NOT, director Olivier Bernier aims to continue that progress by amplifying the voices of the least heard segment of our population, people with intellectual disabilities. The film aims to break down the social and systemic barriers that routinely segregate and hide them from society.

Total school enrollment for K-12 children with disabilities is 7.3 million, accounting for 14% of the children enrolled in the public school system. “I set out to make FORGET ME NOT as a starting point for the parents of typically developing children, educators, and policymakers who may be learning about the concept of inclusive education for the first time,” says director Olivier Bernier. “It was important that the film felt accessible, engaging, and relatable to anyone watching. In sharing some of my family’s most intimate moments, I hope that the film will inspire conversations, and continue the work that the Oscar-award winning documentary Crip Camp has been doing to help build awareness and a more inclusive society.”

FORGET ME NOT is directed by Olivier Bernier and produced by Rota6 Films with Tiffany Conklin, Alana Institute, Videocamp Film Fund, Human Rights Watch and Maria Fahrina Films. The production crew included several young people with disabilities, as seen in the closing credits of the film. The film also won the Hernandez/Bayliss prize for Triumph of the Human Spirit at the Middlebury New Filmmakers Festival and was an official selection at the International Puerto Rican Heritage Film Festival, the New Orleans Festival, Act Human Rights Film Festival, and the Only in New York Documentary Program at Doc NYC Festival.

The documentary has a running time of 103 minutes, is not rated and is heading to DVD and STREAMING (Hoopla, Vimeo) on October 18, 2022 with more platforms to follow.

The DVD Extras include an accessible Audio Description, closed captions in English, Spanish and Portuguese; and three additional bonus features:

Revisiting Willowbrook – Fred Goldstein, a resident of the Willowbrook State School from age four to age twenty, visits the abandoned campus with his brother Allan for the first time since leaving.

From Inclusion to Hollywood – Zack Gottsagen, star of The Peanut Butter Falcon and an actor with Down syndrome, gives a tour of his home and talks about the experience of being an actor. His mother, Shelley Gottsagen, discusses inclusion and how it led to Zack’s successful career.

Workplace Inclusion – John Lee Cronin and Mark X. Cronin, are a father & son business team. John, who has Down syndrome, discusses the founding of their business, John’s Crazy Socks, while Mark emphasizes the importance of hiring people with different abilities.

As 3-year-old Emilio prepares to start school, his family finds itself embroiled in a challenge all too common for children with disabilities – to secure the right to an inclusive education. Cornered in one of the most segregated education systems, New York City public schools, filmmaker Olivier and his wife Hilda turn the camera on themselves and their child with Down syndrome, as they navigate a byzantine system originally designed to silo children with disabilities.

Emilio’s parents learn from other families who have fought against the injustices built into the educational system while they continue their own battle for their son’s future.

Forget Me Not reveals a path to a more inclusive society that starts with welcoming diversity in the classroom.

Cinema Libre Studio is a full-service mini-studio known for producing and distributing high-quality feature films and social impact documentaries. Headquartered in the Los Angeles area, the team has released over 200 films. www.cinemalibrestudio.com| Facebook